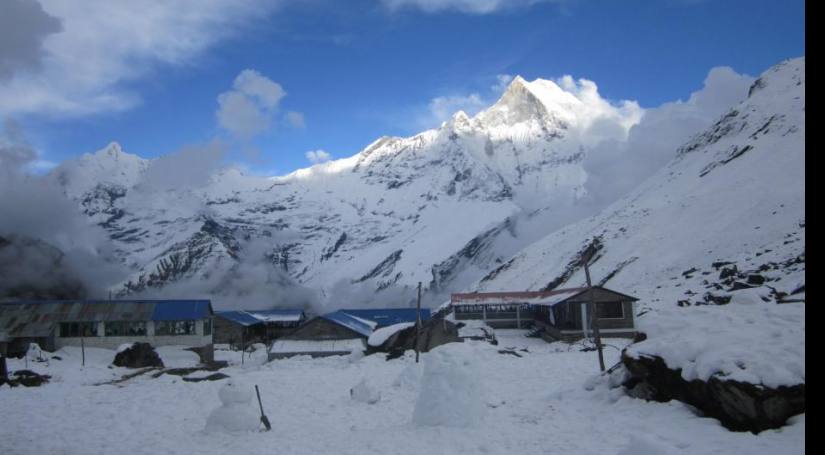 Trekking in Himalaya Annapurna Base Camp

Annapurna Circuit:
Annapurna Circuit is the most popular and requires a minimum three weeks to go the Annapurna massif. Annapurna Circuit makes Trekking is special that you can look up to something new in scenery everyday. Annapurna Conservation Area begins at 790 m and reaches a high of 8,091 m, the summit of Mount Annapurna I, the world’s 10th tallest peak. Annapurna Trekking encompasses forested middle mountain, high Himalaya and trans-Himalayan desert plateau similar to the landscape in Tibet as you move north. The lower elevations are dotted by Gurung, Magar, Thakali and Brahmin villages while Tibetan cultural influence becomes apparent as you go north.

Annapurna Circuit Trekking goes counter-clockwise from Besi Sahar, Manang, and reaches its high point at Thorong La pass at 5,416 m. On the way, you pass through stunning mountain scenery  Annapurna I, Annapurna II, Annapurna III Annapurna IV and Dhaulagiri. In between these two 8,000 m peaks lies the dramatic Kali Gandaki gorge, the deepest in the world.

MUSTANG:
Mustang is an experience of trans-Himalayan landscape and exotic Himalayan cultural experience. Muktinath (3,749 m) is a popular destination for pilgrims and trekkers to the Mustang. It is a site of holy for both Buddhists and Hindus. There is now a motorable road from Muktinath to Beni, from where you can catch a bus to Pokhara.

Lo-Manthang is most popular  and extremely exotic destination of Upper Mustang. Many tourists visit Lo-Manthang during Teeji festival that is usually scheduled in the month of May.
Being in the rain shadow area, Upper Mustang can be visited even during the rainy season. Upper Mustang falls in protected areas and one need special permit to visit the region.

MANANG:
Manang is the eastern part, follows the Marsyangdi River upstream till Manang, which is a string of seven villages that form the upper arc of the Annapurna Circuit Trekking Trail. Manang is composed of stark, rocky terrain, very similar to the Tibetan plateau, and is dotted with turquoise lakes, including Lake Tilicho (4919 m), the world’s highest lake.